A Voyage of Adventure and Romance. Sort of! 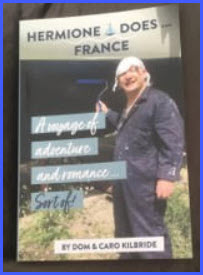 Dom Kilbride retired in 2015 after 30 years service in the police. He had promised himself a sailing adventure on retirement and spent the last 20 years learning to sail and convincing his long-suffering wife that this was a good idea. A decision was made to sail a yacht through central France to the Mediterranean, Dom having lost the ‘Biscay is not that bad’ argument. Caroline invested in a career break to see how living with her husband on board a boat 24/7 would go and with this in mind made certain specifications about what any boat should contain in order to woo her abroad. A  1987 Southerly 115 ‘Hermione’ seemed to incorporate them all with a big stern cabin, hot water, heating, a shower and two heads. The magic keel also meant that the canals were doable. In May 2016  the voyage began. Hermione Does France recounts this journey and all the trials and tribulations that can befall such an adventure. This is a very light-hearted book with plenty of pictures and many funny moments as Dom and Caro get use to their new boat, the French people and the French canals.

It is available on Kindle books and hardback here 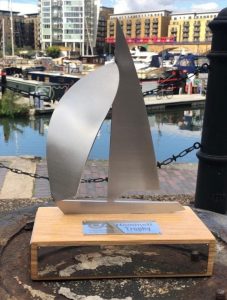 Peter J. Bell. For his log “The Covid Year”

This prestigious trophy is awarded to the best log of a voyage featuring a crew derived from the CA Crewing service.

The log describes the Adventures of Dofesaba II during the Covid year when few people were sailing and few using the crewing service. One of the many tribulations were, that skipper and crew were unable to meet beforehand, having only one Zoom communication before the crew arrived on the boat, however as the log describes, a lot of fun was had by all.

Since the end of the voyage, Peter has incorporated the basics of the log into his second book. Called strangely enough The Adventures of Dofesaba II 2019 and 2020 subtitled The Punic Coast and The Covid Year.

This book is actually two books. Their adventures in 2019, where they came down
the East coast of Spain, (The Punic Coast) followed by the next book based
on their  adventures the following year in 2020, which as we all know was
“The Covid year”. Peter decided to join them together after the 2020 book was a little light on content. While there were some exciting adventures, and “things” did happen, they only had eight weeks in which for them to happen, as opposed to the nearly sixteen weeks from the previous year. Peter did not feel that as two books the reader was getting a very good deal, So he joined them together.

The book is full of photos and maps in full colour and is written in a light-hearted – yet informative manner.

This is actually the second book of Mary & Peter’s adventures, so to catch the
spirit of Covid he thought that it would be wise to get this into the marketplace before everyone gets vaccinated and forgets how disruptive to life and normalcy the virus was. Also, currently, there is a lot in the media about the Orcas around Tarifa, as you will read about, they were slightly involved in that, if only as bystanders. 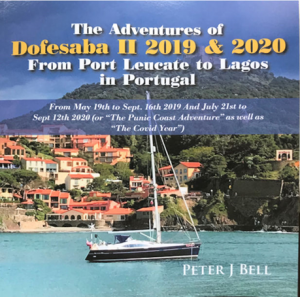 The East coast of Spain is not as well visited as the Algarve by yacht based folk and Peter felt they are missing a lot. If this book inspires anyone to try their luck up that coast, well then,  job done.